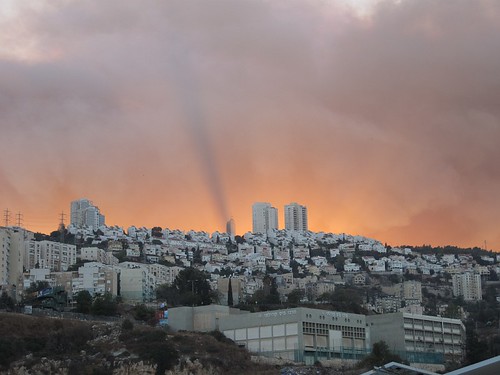 Israel faces a desastrous forest fire on the Carmel hills around the port city of Haifa, Israels third largest city.

Over 40 people have been killed in the firestorm.

Thousands of dunams of forestal land have already been devastated.

Whole villages have been destroyed.

Israel asked the international community for help. Help from Greece and Turkey already is at the location.

According to the latest news, Israel only has an out-of-date fire-brigade (at least in Haifa), under-paid fire fighting personnel and not a single fire-fighting plane country-wide. None.*

Therefore, people in Haifa and elsewhere in the country are upset about this.

For centuries, the reforestation of the land of Israel ist part of the nations pride. And rightly so. Until today, generations have contributed to the Jewish National fund to make this enormous work possible.

How it comes that no preparations whatsoever have been made to protect this valuable nature against proliferating fires, i.e. a most common threat in dry regions?

Maybe not all of Israels “security considerations” should focus on warfare items.

Nobody wants to talk about the costs of this system, for saving lifes is invaluable.

America wants to contribute some outstanding 250 million Dollars. Each battery of this system costs about 10 million Euros, and at least 20 batteries are needed.

The commentator from UPI mentions correctly that it is dubious to bring a system in effect which costs a fortune to fight a system which is extremely cheap. With other words: Hamas or Hezbullah will be able to ruin Israels defense budget just by launching some hundred junk Qassams:

Why not take a tiny share of these inconceivable costs and buy at least some fire-fighting planes and pay the fire-brigades a decent salary?

Even better: Why not transform the whole of this ridiculous Iron Dome system into something really useful?

* “In recent years, there were numerous reports in the press on Israel’s deteriorating fire services. Just a week ago notable environmental journalist Aviv Lavie (Maariv) told the story of fire department officials that are trying to sound the alarm, claiming that they lack the means to battle major bush or city fires. “One day our luck will end, and they [fire department officials] will end up testifying before a national inquiry committee,” Lavie concluded.” (Magazin 972)