I am amazed at how rapidly President-Elect Obama is moving to put his cabinet and advisers in place. 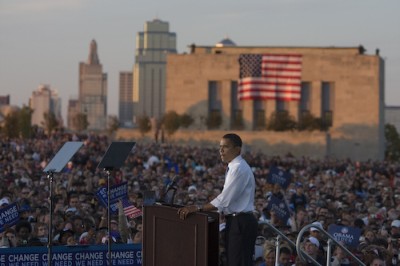 We are in a severe economic crisis that many compare to the „Great Depression“ of the 1930’s.

Mr Bush has finally appointed a good economic team to try to stabilize market and banking industry (and who are not his political cronies [Kumpels]).  However, his time is short, and he personally has done very little restore confidence in our economy.

That is where Mr Obama has begun to take the rudder, and  has quickly started building his team of financial advisers and top cabinet members.

I personally have never seen a President Elect move so fast and so deliberately [aus eigenem Antrieb / entschlossen].

There is a three month gap from the election to inauguration [Amtseinführung], and the new President Elect seems to be using this time  to gather some really smart and bipartisan [parteiübergreifend] folks around him.

They include many old Clinton cabinet members, and former foes [Widersacher] like Hillary Clinton as possible Secretary of State.

He is determined to hit the road running on January 20, the inaugural day.  The „lame duck“ President and Congress will do nothing in the interval, as usual.

This 3 month hiatus [Lücke] is unique.  Since our President and Vice President are our only nationally elected individuals, the founding fathers [Gründungsväter] decided to use the Electoral College [Wahlmännerversammlung] to cast the final votes for them. (The Electoral College is thought to be modeled after medieval German Law that the German Kings used to be elected by the College of Prince-electors.)

Each member of the College is selected by the popular vote of the State they represent, and the „winner takes all“ the States votes.  (I personally have never met any of these folks, and they are selected by the State political parties.)

Each State has votes equal to the number of its Senators and Representatives it sends to Congress.  The College meets in January to „officially“ elect the President and Vice President.

The timing of the College vote was originally to allow all the Representatives to get to Washington in 1785, and it hasn’t changed even though we have replaced the horses and buggies with autos and jets.

So you can see that though the Obama election was historical and the win „large“, the actual plurality was really close.

He is going to have to govern wisely and from the center if he wants to really provide us with the changes he „promised“ during his campaign.

I recommend the book „Team of Rivals: The Political Genius of Abraham Lincoln“ by Doris Kearns Goodwin and Richard Thomas.  It describes how Lincoln selected his most serious political foes to take positions in his cabinet because he thought they were also the best qualified for the positions.

Obama says he has learned a lot form Lincoln, and may be modeling his cabinet on this one?

Also, I am sure you have seen the web site Change.gov which is Obama’s official site and is where he is giving his weekly talks aimed as us common folk.

Happy Holidays to you and yours!