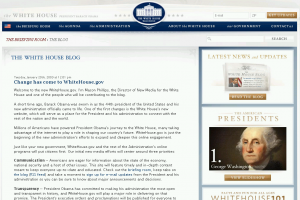 “A short time ago, Barack Obama was sworn in as the 44th president of the United States and his new administration officially came to life.

One of the first changes is the White House’s new website, which will serve as a place for the President and his administration to connect with the rest of the nation and the world.

Millions of Americans have powered President Obama’s journey to the White House, many taking advantage of the internet to play a role in shaping our country’s future.

WhiteHouse.gov is just the beginning of the new administration’s efforts to expand and deepen this online engagement.

Just like your new government, WhiteHouse.gov and the rest of the Administration’s online programs will put citizens first.”